There was a day, early in this pandemic, when it struck Sara Cody that none of their efforts to control the coronavirus was yet working and more drastic measures would be necessary.

It was March 13. Cody, the health officer of Santa Clara County, had decided she needed to ban all gatherings of 35 or more people, and place severe restrictions on smaller meetups. She’d essentially told people to stop coming together at all.

“I remember very clearly, on March 13, being so nervous about that,” she said in a recent interview, laughing mildly at the thought. “So much evolution happened between that day and the next Monday.”

The county had 79 cases that Friday. Three days later, it had 235. And Cody led the ranks of Bay Area health officers to shut down six counties and order 6.7 million people to stay home.

Wednesday will mark 100 days since shelter-in-place orders were issued on March 17. Experts believe the move prevented thousands of deaths and tens of thousands of infections. It kept hospitals from being overrun and gave cities and counties precious time to learn about this new virus and mount a defense against it.

But more than 500 Bay Area residents died of COVID-19 in that time. More than 18,000 tested positive. And the coronavirus that drove millions of people into isolation remains as sinister and unpredictable now as it was 100 days ago. What’s changed over the past three months is not the virus, but the way the Bay Area lives with it.

The first shelter-in-place orders were for three weeks. No one in public health really expected that would be enough time to suppress the virus and let life resume as normal — but few predicted that 14 weeks later there would be no end in sight to this pandemic.

And that may be the most remarkable shift over these past 100 days: The coronavirus is not a novelty, or a flash of biological terror to be vanquished. It’s not SARS or MERS. The world is going to be cozy with this virus for a long while, experts now believe.

The coronavirus has exposed some of society’s most shameful weaknesses, most notably its disproportionate attacks on communities of color. It’s cut through nursing homes and prisons and homeless shelters. Essential workers — employees at grocery stores and pharmacies and hospitals who have not had the luxury of sheltering in place — have been particularly at risk, along with their families.

But the virus has revealed resilience, too, in the Bay Area’s collective commitment to sheltering in place and looking out for one another.

“It’s been a very emotional 100 days,” said Cody. “I would say we’re collectively going through the stages of grief. We’re not yet at acceptance.”

Not yet, but almost — it’s acceptance that is now drawing the Bay Area and the rest of the country out of its long isolation and back out into the open and something like normal life, albeit it one with face coverings and no hugs or handshakes.

Daily case counts across the state are higher now than at any other time during the past 100 days. In the Bay Area, newly reported cases on a daily basis are more than double what were reported in the days leading up to the unprecedented shelter-in-place orders.

But they’re also relatively stable in the region — a dramatic improvement from the exponential growth reported over the first two weeks of March, when new cases were doubling or tripling every few days. Bay Area hospitals have plenty of room. There’s no shortage of intensive care beds or ventilators. Testing is widely accessible.

The coronavirus is still here. In fact it’s probably far more widespread now than it was in March.

The tens of thousands who have already been infected and the loved ones of those who have died already know well the consequences of this virus.

Across the region, public health leaders, infectious disease experts, health care providers and everyone who has been dutifully sheltering in place are just beginning to understand how it has shaped the recent past and will define the next 100 days and far beyond.

Erika Jenssen, deputy director of Contra Costa Health Services, recalls the approach of the coronavirus as anticipating a tsunami. There’s that moment, before the waves crash and inundate the shore, when the water is pulled back out into the sea and those who are paying attention understand the horror that’s to come.

“I remember doing calculations about how many people might die. And looking at Santa Clara, and just feeling this super big sense of dread,” said Jenssen. “The water was going out and we were thinking, what can we do? We’re not ready. There was this feeling of, ‘What’s something dramatic that we can do?’”

The answer, of course, was sheltering in place. Public health officials across the region said they knew at the time that it was a draconian strike, but all other options were too little, and it already was getting too late.

But understanding that their decision would have profound repercussions was not the same as watching those effects play out, said Louise Rogers, chief of San Mateo County Health.

“We knew there would be a trade-off,” Rogers said. “But I didn’t really have a full understanding of how deeply impacted so many people would be, and how much it would reveal some of the deep systemic issues that already exist in society – the inequalities and the disproportionate effects.

“This may have just been denial, but what this could look like over many, many, many months was a much greater impact than any of us really could have imagined,” she said. 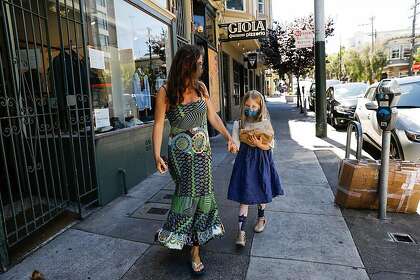 John Swartzberg has spent his career in pandemics. An infectious disease expert at UC Berkeley, he’s taught them and he’s studied them. He recalls clearly the worst years of the AIDS pandemic. And still, somehow, COVID-19 surprised him.

“Intellectually, I could see what was happening. I could see that things were going to get worse,” Swartzberg said, thinking back to early March, when the case counts were climbing across the Bay Area. “Emotionally, I was having a lot of trouble wrapping my head around what was going on. I’ve been teaching infectious diseases to graduate students for 40 years, and about pandemics and how they were certainly going to happen. And here I was in the midst of one, and my emotional side could not wrap my head around it.

“That dissonance was fascinating,” he said with a chuckle.

By the time the Bay Area launched into sheltering in place, “my colleagues and I knew we were in for the long haul,” Swartzberg said.

Over the 100 days since, he and other infectious disease experts said they’ve found reasons to be hopeful. The coronavirus, for how quickly and efficiently it’s traveled around the world and crushed economies, is something they believe humans can learn to live with, at least until a vaccine or effective treatments arrive.

In a relatively short period of time, they’ve learned simple, if culturally transformative, actions can prevent spread: wearing face coverings and avoiding close contact, primarily. If people can adjust to those changes, they can have a great deal of their lives back, infectious disease experts said.

But behavioral changes are hard. And everyone’s already tired of fighting. Public health experts may have identified strategies over the previous 100 days, but whether the public will embrace them over the next 100 remains to be seen. 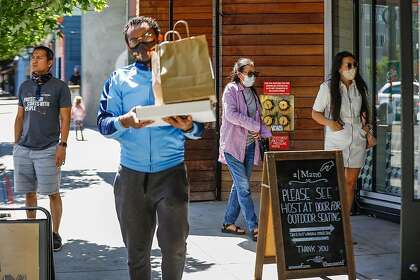 Jahan Fahimi remembers watching the hospitals become overrun in New York City and bracing for the same. An emergency doctor at UCSF, he assumed it was a matter of time. Even with the Bay Area sheltering in place. Even with everyone doing their part.

“We were absolutely convinced some version of that was coming to California,” Fahimi said. “All of us were heartened by the city of San Francisco acting quickly. But I think we were all skeptical that it would have the effect that it did. We just assumed that the surge was still coming.”

This week marks 100 days since the Bay Area began sheltering in place. What have we learned in that time? And what does the future hold for our region and the fight to contain COVID-19?

Special report: This week marks 100 days since the Bay Area began sheltering in place. What have we learned in that time? And what does the future hold for our region and the fight to contain COVID-19?

Every day, they watched the patient intakes, and watched the numbers climb. Through March and April they waited, and they prepared. They stocked up on personal protective equipment and transformed entire floors into COVID-19 wards. They made schedules and developed plans for how to treat critically ill patients when they were pushed past capacity.

“And day by day, as we looked at that data and saw that the surge wasn’t today and it wasn’t tomorrow — at some point it became clear that the curve really was flattened,” Fahimi said.

There wasn’t one moment when it became clear that they’d avoided a dire fate, that they’d pushed past some near-invisible peak. But eventually, health care workers across the region figured it out, and amid the relief was something else: exhaustion.

“There was the anxiety of checking on this day after day,” Fahimi said. “Instead of seeing the spike up and the downfall, we just had this steady state that has been going on for months now.”

Statewide, hospitalizations for COVID-19 have been tipping up in recent weeks. But the number of patients hospitalized in the Bay Area is at its lowest level since March. Everyone in health care is grateful for that, Fahimi said.

“And now I think the next challenge that we’re grappling with is just the fatigue,” he said. “And still the uncertainty of what is to come. And how we’re going to sustain all of this.” 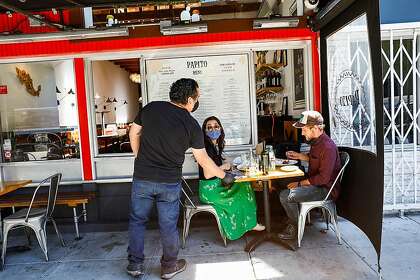 On Monday, 91 days after Kathryn Sandretto locked the doors of the Hayes Valley clothing boutique she manages, the first customers came back.

“It was maybe four people,” said Sandretto, manager of Acote. She didn’t mind the low volume on her first day of business after sheltering in place. She gets it — people are still nervous. Sandretto is nervous.

The morning the stay-home orders were issued, Sandretto’s boyfriend dropped her off at work, and he told her he thought they wouldn’t be open much longer, that the city would be shutting down soon. Sandretto disagreed, but at the same time, she’d noticed that the normally bustling shopping district was deserted. Customers already were staying away.

“So I can’t say that I was totally shocked,” Sandretto said. But on that Monday the orders came down, “the realness, the reality of what this pandemic actually has been doing, started to sink in. And that’s when we saw those numbers skyrocket.”

Sandretto has embraced the new rules of life in a pandemic. She wears a face covering. She washes her hands frequently. She doesn’t get too close to others. She’s been tested twice because she has people in her life who have health conditions that put them at risk and she doesn’t want to infect them.

It feels like the shop was closed for ages, she said. She had to pack up a full season of clothes that the store never got a chance to sell. For the reopening, she keeps a box of surgical masks near the front door. She put up signs reminding people to keep 6 feet apart. She set up a hand-sanitizing station.

“There’s no way we can go back to what we were before,” Sandretto said Monday afternoon, just before closing the shop on the first day back in business. “This is the reality. I’ve accepted we’re probably going to be doing this for the next year or two. It’s sinking in.

Analysis | The Health 202: Nursing home residents may account for one-half of all U.S. coronavirus deaths – The Washington Post